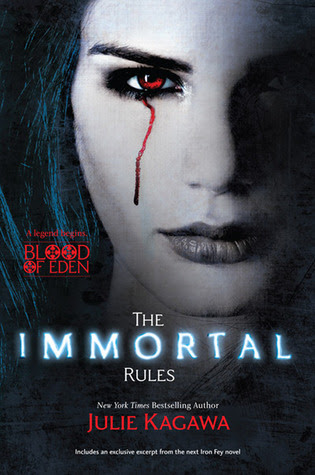 The Immortal Rules by Julie Kagawa


To survive in a ruined world, she must embrace the darkness…

Allison Sekemoto survives in the Fringe, the outermost circle of a walled-in city. By day, she and her crew scavenge for food. By night, any one of them could be eaten. Some days, all that drives Allie is her hatred of them—the vampires who keep humans as blood cattle. Until the night Allie herself dies and becomes one of the monsters.

Forced to flee her city, Allie must pass for human as she joins a ragged group of pilgrims seeking a legend—a place that might have a cure for the disease that killed off most of civilization and created the rabids, the bloodthirsty creatures who threaten human and vampire alike. And soon Allie will have to decide what and who is worth dying for…again.

This book was just plain awesome from the first few pages!! I mean, what can go wrong in a book set in a dystopian world shared by humans, vampires and zombies (that are called rabids) all together?!

This book tells the story of Allison, a human girl who lives in a city ruled by vampires. She hates the vampires and think of them as soulless monsters who treat humans as walking blood bags. That until the night she is turned into a vampire by herself.
Allison leaves her city and has to deal with the twisted dystopian world outside, all full of bloodthirsty rabids. In her way, she pretends to be a human and joins a group of people searching for Eden - a legendary land where there are no vampires or rabids. Can she control her Hunger and keep pretending to be a human? Can they survive the journey and reach Eden?

The characters in this book were very well developed, and they were actually what I liked the most about this book.
Allison, the main character, was definitely my favorite. She was such an extraordinary (I love this word lol) person. She was extremely brave and smart and could get herself out of deadly situations without any help. I really adored her ability to both physically fight well and think of brilliant ideas and plans in the middle of a fight. She never panicked and always thought rationally.
What I liked even more about her was her good heart and her tight hold on humanity, even when she became a vampire. She never let her lust for blood take over her and was ready to do anything to keep her loved ones safe.
My second favorite character was Zeke, a member of the group of people searching for Eden, and Allison's love interest. He was just the sweetest guy ever!! In this twisted, violent world, in which only the strong ones survive, he has managed to remain a good, caring person. He has sworn to never leave anyone behind, and he prefers to save the lives of the children in the group over his own.
I really loved to read about the relationship Zeke and Allison shared. The romance between then developed slowly but surely. They got closer and closer to each other until they finally admitted their love. I especially liked how Zeke became all shy and sweet when it came to Allison...

This book was action-packed. There were a lot of fights, filled with blood and dead bodies. Sometimes it felt too brutal for me... I mean, literally HALF of the characters in this book has been killed, whether they were eaten by rabids, murdered brutally by humans or emptied from blood by vampires. At the beginning I could stand it, but as the book progressed it became too much. I started guessing who is going to die next!

Overall, this book was really good. I think it has a very original take on both the paranormal and dystopian genres. I can't wait to read the next book (I've got an eARC, so it's not gonna be a problem...) and I will be very happy to read other books from this paranormal-dystopian types.
I recommend it to people who like violent, intense books with a strong, feminine male character like The Hunger Games and Divergent.

Hope you find my review helpful. PLEASE FOLLOW MY BLOG!!
I really want to reach 100 followers (and even more if it's possible LOL)
Thanks XOXO
Sapir
Posted by Unknown at 9:32 AM