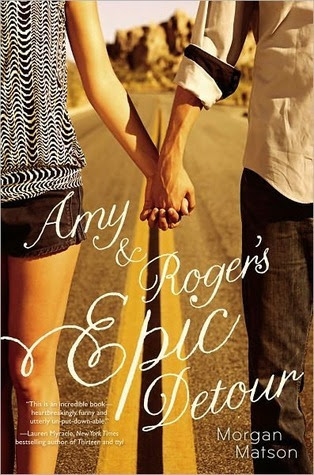 Amy Curry thinks her life sucks. Her mom decides to move from California to Connecticut to start anew--just in time for Amy's senior year. Her dad recently died in a car accident. So Amy embarks on a road trip to escape from it all, driving cross-country from the home she's always known toward her new life. Joining Amy on the road trip is Roger, the son of Amy's mother's old friend. Amy hasn’t seen him in years, and she is less than thrilled to be driving across the country with a guy she barely knows. So she's surprised to find that she is developing a crush on him. At the same time, she’s coming to terms with her father’s death and how to put her own life back together after the accident. Told in traditional narrative as well as scraps from the road--diner napkins, motel receipts, postcards--this is the story of one girl's journey to find herself.

This book has been on my to-read shelf for a very long time. It looks pretty nice - I really like the cover and the whole road trip idea sounds pretty interesting, but I never really felt like starting it.... It was just there, on my list of to-read-if-you-don't-have-anything-better. The only reason I finally decided to read it was a group read in the Goodreads group I moderate (Teen Critic).

I can't even describe how glad I am that I finally picked it up. This book was perfect. There isn't a better word to describe it. It was exactly what I needed right now.

This book focuses on a road trip Amy takes with Roger - a guy she has just met - from California to Connecticut.  This trip was all planned for them by Amy's mother, and included staying in the most boring places in America. They decide to take a little detour and visit places they find truly interesting. In the way they meet special people and finally get to know the country they live in and also themselves a little better.
The road trip was the best thing about this book, that's for sure. As a non-american girl, everything I've read was new to me and I learned a lot. Until now, the only thing I knew about states like Kentucky and Kansas were their names. Matson described each country they passed in a beautiful way, which gave me a lot of information but didn't feel boring or over-detailed. Matson's writing style was just fantastic. She has a way with words.

My favorite character in the book was definitely Roger. He wasn't the main character, but because Amy got so close to him I really had the chance to understand and feel like I actually know him in real life. He was always good-mannered and caring and always knew to do the right thing to help Amy. He knew when it was best for her to keep things for herself, but on the other hand he let her cry and express all her emotions when she needed. He was very sensitive to other people's feeling and has always managed to keep everyone around him happy, which was admirable. He was the perfect guy to balance Amy and help her built her trust in herself and in the world around her again after that terrible accident that happened in her past.

This book had some insanely great supporting characters. Amy and Roger met one of Roger's friend in almost every state they stopped, and these characters really added to the book. They gave Amy and Roger's a tour of the state they live in the way they see it as young adults, which was very refreshing and interesting. Each one of this characters was surprisingly well-developed, considering the fact that they appeared in the book for just a chapter or two. That means the author really invested a lot of thought in the story she'd written and I really appreciate that. It would've been amazing if she wrote a full-length novel about each one of these characters, they were that interesting.

This book has everything a contemporary novel should have - a great plot, an awesome setting, a handsome and nice love-interest, an addictive writing, a lot of emotions and witty humor. I highly recommend it to anyone who's looking for a fun read that is also deep and emotional. Seriously, you  really should read it if you haven't done it yet. You'll be surprised at how good it is.

Sorry, I won't be very active here until September

This is going to be my very last post in this blog.
Blogging's been a lot fun. I met a lot of new people who love books like me. The problem is how addictive and time-consuming it became. I feel like I'm giving up on other more important real-life things for this blog.
Thank you so much for being such great readers, it's been a pleasure to read your comments and talk to you guys <3

Yours for the last time,
Sapir

I really miss blogging!! It's a very busy time right now for me but I'll try to update a little bit. Maybe post a review here and there.... Thanks for you support and understanding!! I really appreciate that ♥